The itinerary, that starts from the San Rocco parish Church yard, develops along the western side of Mt. Portofino and is mostly easy, panoramic and leads to other routes. The easy and flat mule track runs through the Poggio and Mortola areas and becomes a tortuous path departing from the houses, and reaches the sloping ridge from Mt. Portofino to the Semaforo Nuovo area.

The hedgerow vegetation alternates with cultivated areas on the way and the conglomerate replaces the Mt. Antola limestone in a wide variety of views and appreciable and charming landscapes. Man’s life is still sea-based here, as testified by the “chiari”, that are boats moored near the point and illuminated with the “lampara” for night fishing. The many white spots over the sea surface nearby are formed by the floats that delimit the area occupied by the tunny fishing net during the summer season.

Towards Punta Chiappa you can understand how the vegetation will be further on the route: olive 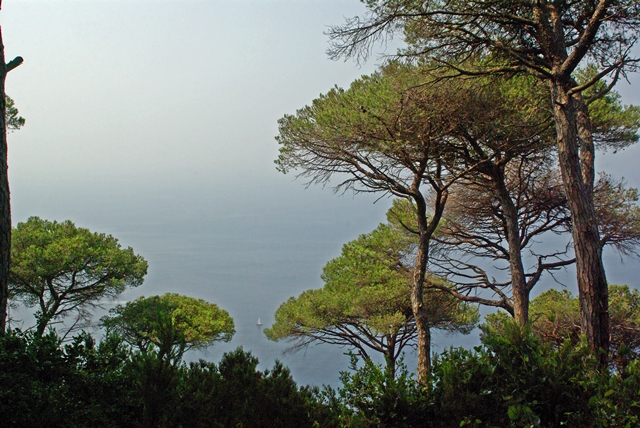 groves near inhabited areas, the Mediterranean maquis, the mesophilic wood formed by the black hornbeam and manna-ash in the small damp valleys that cut the mountainside.

Below the pathway the craggy coast plunge into the sea, that is limpid and often reveals the alternation of sloped rock blocks and sandy floors tarnished by the dark meadows of Neptune grass.

As you pass the last house, you reach a little bridge. Some wash tubs collect the water of Vegia spring. Moving on you can notice that the landscape changes as the rock substratum becomes more rough and steep where the conglomerate is. The steep hillsides have thin crests and ridges indented by squared rock towers.

You go up to the left at the crossroads near Fornelli, that also goes to Batterie and to the Semaforo Nuovo, and you fisrt enter in a cluster-pine wood with the main elements of the Mediterranean maquis underneath. On the left of the path you can find the rare spatulate saxifrage, on a vertical face of the valley.

The pathway arrives at Toca passing through the many hazelnut trees that have grown in an ancient glade. Here you can find a panel with an aerial photo of the Park, where pathways, villages and many other information are shown, and a small rest area.

Now the panoramic and suggestive footpath runs through the western side of the inlet of San Fruttuoso and the whole Cala dell’Oro on a constant 450 m a.s.l.

There are long sunny periods in this area, with average high temperatures even in winter, high evaporation and a fair aridity as a consequence, mitigated only by the hot and damp sea breezes that partially condense into water vapour.

The winds blow, from every direction apart from the north, on the steeo ridge that plunges into the sea; you can feel their breath just outside the wood. Rock vegetation and “gariga” are all around on the conglomerate.

You can see other two footpaths that run parallel to this route along the hillside of Cala dell’Oro.

The middle one, known as Sentiero dei Tubi, follows the course of the Caselle aqueduct which is fed by five springs located above San Fruttuoso. This aqueduct supplies water to the village and along this dry hillside for fire-prevention thanks to recent works promoted by the Park. 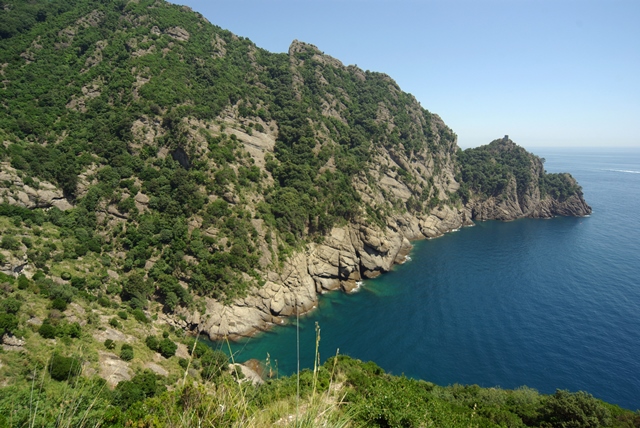 The other path links San Rocco to San Fruttuoso, running past the sea right near Cala dell’Oro.

Going down the panoramic rocky ledge towards the following cutting, after a few steps you can see a small spring a little above the path, like the other ones, is a point of reference for reptiles (wall and green lizard, gecko, snake) and small local birds.

Filtered water percolates through the rocks dripping into a small natural basin. During the more arid periods the spring dries up and this intermittence leads one to think that the spring is scarcely fed with only short underground flow.

The natural peculiarities of the deeper gorge you can find along the route, that is damp and rich in mesophilic species with their completely soaked trunks, saved the nearby Cala dell’Oro and the Mediterranean maquis all around from above a fire. The prevailing shrubs better resist fire, or recover more quickly after it. For this reason heather, female cistus, strawberry tree and Mauritania grass are very frequent here and along the whole Promontory coast.

The surrounding hillsides steeply slope down to the sea where they  maintain the same vertically, giving rise to considerable depths (60-80 m) just a few meters from the coast. Here, as in the slope above, there are interesting variations in flora and fauna.

You soon reach a panoramic point there, beyond the thick evergreen shrubs of the Mediterranean maquis, you can see a village below, on the coast between Punta Chiappa and Portofino Mare. This is San Fruttuoso di Camogli.

It is a fresh, damp and dark setting, very different from that of remaining hillside, that is dry and lashed by south winds.  The itinerary runs away from the canyon occasionally, going immediately near the sea. This valley you are walking through is due to a deep north-south cutting formed during the conglomerate uplift and settlement period.

Now you can observe the vegetation downhill, with a mixed holm-oak, black hornbeam and downy-oak wood. The environment is ever fresh and shady under the evergreen trees, not dried by long sunny periods. The underbrush is consequently fair thin, with only a few species such as butcher-s broom and ivy.

The path turns leaving the valley towards the sunny southern hillsides, damaged by many past fires. After a little while you arrive at a white tank with water flowing inside. The water of five springs is collected in this area, called Caselle, and subsequently carried to San Fruttuoso by a small aqueduct.

You arrive at Molini area, through fascinating panoramic view towards the low part of the valley, where a recently opened “agririfugio” (agricultural mountain cottage) stands. The old terraces, with their drystone walls made from conglomerate rocks of all sizes, have been restored and the olive groves are well cultivated.

The 16th century Doria tower, built in 1562  in defence of the Moor pirates raids, stands near the houses of San 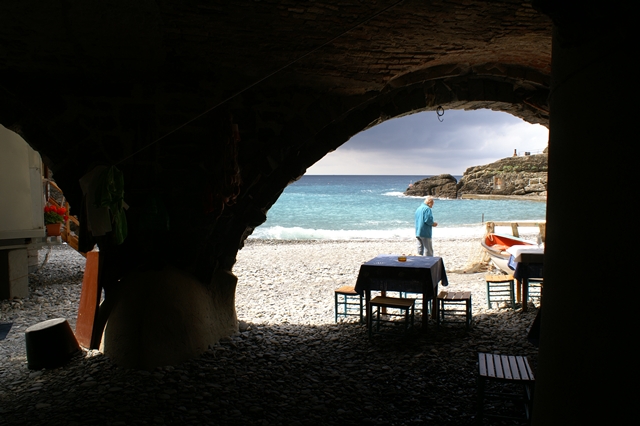 Fruttuoso. It was an elementary school from 1880 and now hosts the cultural initiative of FAI (Italian Environment Fund).

You soon arrive at the churchyard of San Fruttuoso Abbey with its austere dome, where this itinerary ends. You must visit this village where, besides the fascinating not-to-be-missed monumental complex, you may be surprised to see spring on the beach behind the last arcades of the convent.

The beach is small and pebbly and feels the effect of the wide seasonal and annual variations due to the local debris. Sediment cannot be carried inside the bay, because of the great depth of the sea not far away from the coast near the cove of San Fruttuoso. The beach did not exists once and fishing nets were hung in the sun on the arcades of the convent.